The greatest entertainer in soccer’s history

Have you ever seen any football player who played the beautiful round leather game with smiles all over face?

Is there any other born footballer who brought joy to millions of fans globally?

Which football player has played almost all his matches smiling?

Even when he is badly tackled by opponents and brought down, he shows all his teeth and gets up smiling, even shaking his offender( none other deserve a lifetime FIFA fairplay award).

Like all other Brazilians, he perfected his skills on the arena of “Futsal”(5 aside football).

Why won’t he; when he plays football with live samba music and drums playing by the side which always inspire him to play samba(dancing) football.

The feints, skimmies, dummies, elasticos, nutmegs, Estil Laudrup(no-look pass) were all perfected by Ronnie at an early age of 7.

I recently saw that video again comparing a smiling kid doing wonders in the futsal and an adult doing likewise with same skills, same smiles a d sa.e enthusiasm.

But it wasn’t until he continuously disgraced 1994 FIFA world cup winning captain and Brazilian hero, Dunga, that he came to national prominence and was drafted to the U-20 squad ( probably one of the reasons Coach Dunga didn’t include him in the 2010 FIFA world cup Brazil squad.

At 21, he on the FIFA world cup with the Brazilian R-trio(Rivaldo,Ronaldo, ronaldinho).

And then he moved to Europe; PSG, Barcelona and A.C Milan, before the laws of diminishing returns took hold of him and he came back to where it all started- Brazil.

Ronaldinho Gaucho at his prime:

Without any doubt or argument, the buck-toothed Brazilian at his prime was the best footballer in the world and also…

The greatest sports entertainer globally at his time at Barcelona. 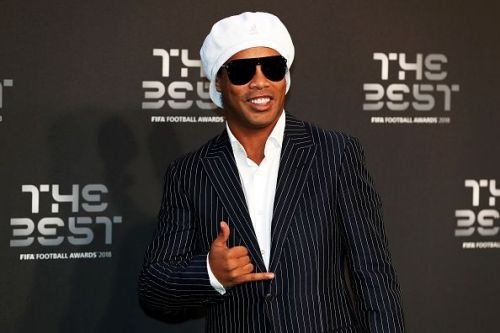 So much was his entertaining prowess that CNNsports always show a clip of his outrageous weekly displays with the blaugrana side.

Everybody loves Ronaldinho; whether you supported Barca or not, you can’t help but applaud him whenever he plays on the field.

He’s the main reason Barcelona fans base increased so much last decade.

Even in 2006, Real Madrid fans couldn’t hold it again when his solo run produced one of the best goals ever seen in Santiago Bernabeu- he received a standing ovation.

His great skills and entertainments on the pitch helped him win FIFA best player and Ballon d’or for two consecutive years( 2004 and 2005)- gone where the days when ballon d’or as given to the best players, and not highest goal scorer or winner of UCL.

Time will fail me to talk about Ronaldinho’s exploits and entertaining abilities on the pitch.

His displays, shoulder pass, back heels, overhead goals, scorpion goals, and lest I forget, that wonderful goal against Chelsea at Stanford bridge in the UCL match; dancing on the spot, before scoring while Petr Czech gladly enjoyed his samba dance and forgot he was the goalkeeper…. So hilarious.

If I should detail every of Ronaldinho’s entertainment, then all the libraries in the world won’t contain what I should say